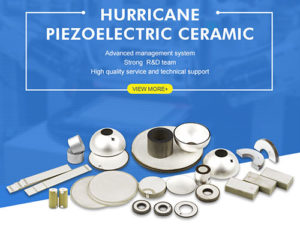 Piezoelectric is the electric charge that accumulates in certain solid materials (such as crystals, certain ceramics, and biological matter such as bone, DNA and various proteins) in response to applied mechanical stress.
The word piezoelectric means electricity resulting from pressure and latent heat , ceramic PZT materials are classified as functional ceramics. in sensors, they can convert pressure and acceleration into electrical signals that convert voltage into vibrations or deformations in sound waves and ultrasonic transducers and actuators and is exploited in a number of useful applications, such as the production and detection of sound, piezoelectric inkjet printing, generation of high voltages, electronic frequency generation, microbalances, to drive an ultrasonic nozzle, and ultrafine focusing of optical assemblies.
Piezoelectric sensors especially are used with high frequency sound in ultrasonic transducers for medical imaging and also industrial nondestructive testing.

In addition to those mentioned above, various sensor applications include: